Man-to-Man Defence will help you win more games in the long run and develop better players. You may not win as many games at first, but I guarantee you’ll be more successful both as a team and as individual players if you teach man-to-man defence principles (below) properly to juniors.

Coaches use zones to hide weaknesses, lack of player development or to contain athletic opposition players. We understand why coaches teach zones but we believe if you work through the principles of man-to-man you will reap the reward of smarter, stronger and more versatile athletes and a far more successful team in the future. As a coach, you get to see players succeed at higher levels because of the foundation you set as a coach.

ONE OF THE MOST-DEBATED TOPICS IS WHAT DEFENCE SHOULD WE TEACH JUNIOR PLAYERS? ZONE, PRESSING, MAN-TO-MAN? THE ANSWER IS WITHOUT A DOUBT MAN-TO-MAN DEFENCE! WE CAN PROMISE YOU THAT IN THE LONG-RUN, YOU WILL DEVELOP BETTER BASKETBALL PLAYERS BY PLAYING MAN TO MAN DEFENCE.

Adopting to play a zone in the younger age groups often develops complacency on the defensive end. Players can often play out of stance or upright, lose court vision and not develop correct defensive techniques. As a result, defensive skills such as ‘closing out’ and ‘containment’ are not taught and/or adopted with any significant value therefore limiting the players development.

Let’s take your centers and/or forwards that you have towards the back of the zone as an example. Just look at their feet as they play in the back of the zone. They rarely have to move quickly, get down in low stance, or transition from shuffle to cross over defensive movements. This changing from run, to shuffle, to cross over, is incredible for athletic development. This is one of the best things you can do. Their legs get stronger, faster, more coordinated, and more athletic.

While we talk of the benefits of man-to-man for athletes defensively, we haven’t touched on the issues zones cause for the development of athletes offensively. Zones limit an offensive teams’ ability to penetrate the key, forcing the offense to take shots from a greater distance.

In the younger age groups, it is common for players to not yet possess the strength and coordination to execute a shot attempt whilst maintaining correct shot mechanics (shooting technique). Also due to strength at this level, it is harder to make the long skip passes necessary to make a zone defence move and then lead to more open shots or penetration, so play is more stagnant and offenses are limited in scoring options.

WHAT’S THE DIFFERENCE BETWEEN ZONE AND MAN-TO-MAN

What is a Zone Defence?

A Zone Defense is different from a Man-to-Man Defence in that instead of guarding a player, each defender is responsible for guarding an area of the court and any offensive player that comes into that area. Zone defenders move within their designated area in relationship to where the ball moves.

Zone Defences can adopt a variety of player alignments, such as but not limited to the diagram;

The shaded zones in the diagrams indicate the area each defender is designated to guard, as opposed to defending an individual player.

What is Man-to-Man Defence?

Man-to-Man Defence has each defender assigned to a designated offensive player rather than an area on the court. As a defender, you are accountable for containing (staying between your player and the basket) your designated player when he/she has the ball.

Teaching Man-to-Man Defence is often considered more complicated than coaching a Zone Defence. That is largely due to the perception that the many required individual defensive skills are more closely associated with Man-to-Man principles. Whatever the case, if you can work on teaching the following skillsets, you’re well on your way to playing an integral role in the development of your young players.

We encourage all junior teams to follow the basic man-to-man defense fundamentals below.

Defensive Stance – Feet should be approximately shoulder width apart, with your knees bent (knees over toes), back straight and head up. Your weight should be evenly balanced on the balls of your feet and your arms should be up with palms forward.

Defensive Slides – When guarding your opponent on the move, we refer to what is called a defensive slide. Using quick, short steps (without crossing your feet over) you move your strong side / lead foot first. If you use your ‘Defensive Stance’ as a starting point, your first step see’s your stance become wider, then your second step see’s you return to balance. The aim when sliding is to stop your offensive players intended path to the basket – turn them to an alternative direction or make them pick the ball up.

Note: There are more advanced defensive movements, however we encourage the more traditional; ‘Defensive Slide’ be adopted in the early phases of development.

This is where we start throwing in team defensive concepts – these are much easier to instill as offensive spacing develops. The two go hand-in-hand and if repetition is provided during team training sessions, development will naturally occur at a faster rate.

Denial – when your offensive player is one pass away from the ball. In your defensive stance, you want to be one step off your player, towards the ball. Encourage an open defensive stance, chest up the court to maintain vision on both your own player and the player with the ball.

Help – when your offensive player is two passes away from the ball. Again in your defensive stance, you want to be on split line (an imaginary line length ways down the middle of the court). This discourages the offensive team to penetrate the key but also allows enough time for you to ‘close out’ should the ball get quickly passed to your direct opponent.

Close Out – when the ball is passed to your offensive player, you must move towards them quickly and in a low stance (balanced). Your first 1-2 steps are long, your last several are short and quick as you throw your hands up to deter a shot. Because you are already in a low stance, you are able to shift into a defensive slide without losing balance.

There are so many concepts available to adopt when it comes to man-to-man rules and rotations, we won’t confuse the intent of this document by diving too deep. When introducing man-to-man defense to young basketball players in a team environment, we encourage you to utilize the Shell Drill as your main teaching base.

We teach our weak side players that are two or more passes away to get on the split line while giving weak side help. This means that Δ3 and Δ5 need to have one foot on the imaginary line that runs between the two baskets.  We do not want to be “hugging our man” on the weak side.  All players should be talking when giving help. Note:  We front the ball side low post. When the post player is on the block. 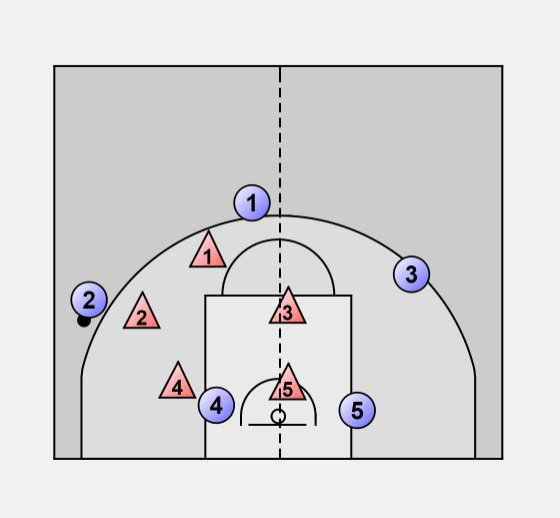 The key to any rotation is not to get beat in the first place. But if it happens players must be in their “split line” positions on the help (weak) side.

In this situation, Δ5 would slide over. If O4 picks up his dribble on the baseline Δ4 and Δ5 should trap him there.  Δ3 rotates down to protect the basket, and Δ1 wants to get into a position where he can see Δ3’s man and take away a skip pass to his man.

How to teach man to man defence